What is a Visual Management Board?

A Visual Management Board is a tool with a set of practices associated with it to help visualise and manage knowledge work. Knowledge work is the type of work that requires some creative human element to get it done – it is something that cannot be fully automated by a machine or does not have a predictable outcome.

How do I setup a Visual Management Board?

The simplest type of Visual Management Board is a three step board – a “To Do” or “Backlog” or items that have not yet been started but need to be done, “Doing” for work that is in progress but not done, and “Done” for work that is finished with no further activities required. 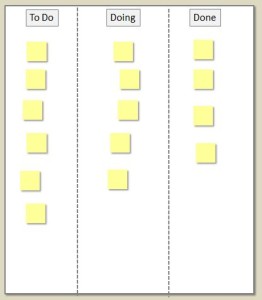 The first optional type of modification to the board is to introduce a time box. The time box is a fixed set of time that is repeatably used by the team to plan work and reflect on what was achieved. Example time box periods could be one day, one week, two weeks or one month. 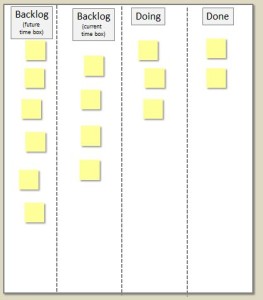 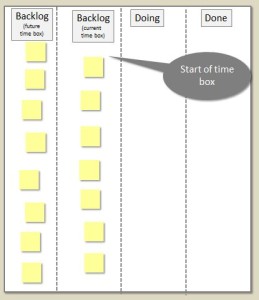 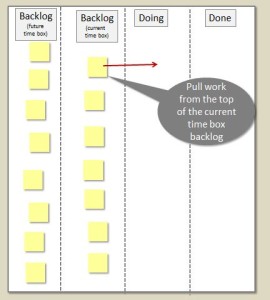 By the mid point of the time box the board should look like the picture below. Note the evenness or balance of the work across the current time box’s Backlog, Doing and Done. Just by looking at the work items on the board it is clear that through put for the time box is at 50%. 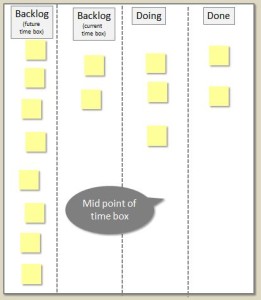 A poor mid time box board would look something like the picture below. Note that few items have been “Done” and there is a lot outstanding in the current time box’s Backlog. 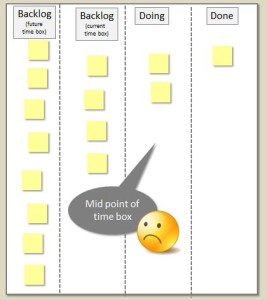 Conversely if too much work has been completed it is suggestive of poor planning. 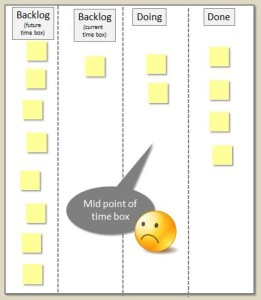 This can be resolved by keeping track of the amount of work done at the end of the time box and using that information to better plan for the next time box. 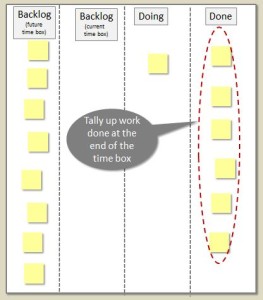 Often however, despite best laid plans to use the information gained from what has been completed in previous time boxes, some work remains at the end of the time box incomplete. When this occurs a decision needs to be made at the end of the time box to confirm that it still needs to be done and the priority of it in comparison to other work planned for the next time box. 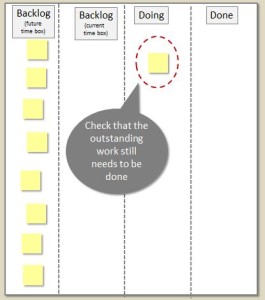 The next time box’s backlog is then loaded based upon the previously completed throughput rates and any outstanding work that still needs to be completed. 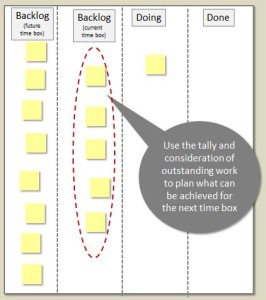 The next optional evolution of the Visual Management Board is to understand flow. Flow are the set of steps that the all work items go through in order to get to “Done”. There could be two steps, there could be dozens of steps. The number of steps will generally expand the board along the x-axis. These steps commonly refer to additional value being added to the knowledge work product. 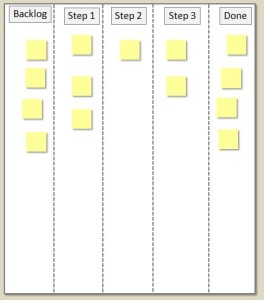 Splitting the steps down to “Doing” and “Done” will provide visibility of work that is actively being worked on by someone in the team versus work that is queueing up and waiting for someone to pick up and action. Splitting the steps means that work isn’t being pushed around the team and instead the team members can pull and action it based on when they are ready. Pulling work reduces the amount of switching between work items that can often happen in knowledge work environments. Work switching is one of the biggest forms of productivity loss so splitting the steps is ultimately about being more productive as a team. The “Done” column is what is known as a queueing column. If the work was for building widgets on a factory floor the “Done” work would be inventory piling up on the factory floor. In knowledge work, inventory waste is often invisible and hence it is more dangerous. 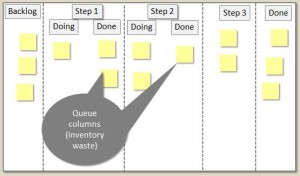 Introducing “work in progress” limits further endeavors to further increase productivity by putting in deliberate constraints that don’t allow teams to build up too much work in flow. For each step the work in progress limits are set to restrict the maximum number of work items are allowed in that step’s column. 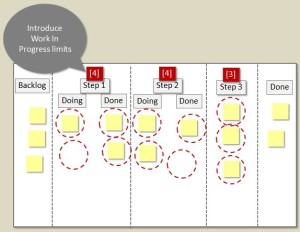 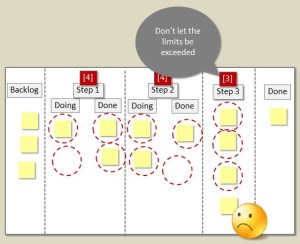